There have been a lot of changes around Blogger in the last year, and there were rumors of its demise, prompting me to post more on my other blog Craig Bergland. It turns out that much of the fuss was about the demise of Google+, which never caught on as a competitor to Facebook. That is really a shame, but not surprising since Google+ wasn't the most user friendly platform for interaction. Combine that with most people have a resistance to change, and failure was almost a forgone conclusion.

As odd as it may seem, I like this platform and now that it seems like it will stick around I intend to continue to blog here. I really believe that Interspirituality is the spirituality of the future, though perhaps not under that name. Whether we want to admit it or not, the truth is that institutional religion in all its forms has had a rough few decades, and the general opinion is that its representatives cannot be trusted. Across traditions spiritual leaders have used and abused those under their care. That fact, coupled with humanity's growing understanding that we don't need an intermediary to access the Divine, has led to a shift in our perceived need for often pants-less teachers and preachers. If our children are not safe among those claiming to be God's representatives, either something is very wrong with God or something is very wrong with how the institution chooses its representatives. I am going to go out on a limb and guess the problem lies with the latter choice. 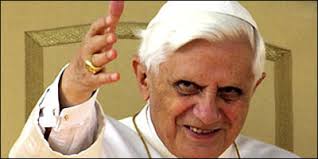 Pope Emeritus Benadryl XVI recently coauthored a book in which he disagreed with Pope Francis' position that in areas of critical priest shortages married priests should be allowed. Francis is essentially saying that the needs of the people are more important than the rules of the Church. Benadryl disagrees, and I have to wonder if that disagreement isn't at least in part an attempt to avoid the transparency that inevitably grows when new faces move into new spaces. A club filled with Queens and Pedophiles seldom welcomes the introduction of married men, because they and their wives may not be subject to the same kinds of coercion necessary to maintain a toxic code of silence. The winds of change are blowing in the Catholic Church, and they are far healthier than the kinds of blowing that have been going on in that allegedly celibate institution for hundreds of years. Anyone with any access to the Catholic Church knows that celibacy is a requirement most often observed by avoiding it, whether with other clergy, a housekeeper, or the local bishop. Change is long overdue, and may be a significant step on the long path toward healing.
Posted by Craig Bergland at 11:23 AM