No More Guru Yoga or Samaya

We have to admit, even if we can't identify the reason, that guru yoga and samaya have become invitations for abuse here in the west. The other truth is that there have been far too many teachers from the east willing to accept that invitation from students here in the west. 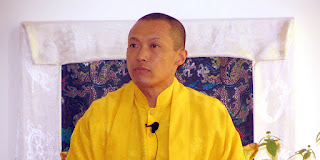 Samaya is a number of precepts taken by practitioners in Indo-Tibetan Vajrayana Buddhism, most of which are harmless. Unfortunately, one of them involves unquestioning, undying loyalty to the teacher, or guru. Guru yoga involves seeing one's guru (teacher) as the Buddha in Buddhism or as the Deity in Hinduism. These two taken together create a relationship that is too easily taken advantage of by an abusive teacher. They also open the door for wounded practitioners (and what spiritual seeker isn't, at least early in their practice, wounded?) to surrender their agency to a human being they have elevated to the status of the Divine.

Some would be quick to point out that these concepts or teachings have actually offered great advantage over the centuries to many practitioners. That may be true, though we don't have much verifiable historical data on these claims. What we do know is that every major school of Buddhism has encountered multiple cases of students being sexually, physically, and psychologically. It would be irresponsible to not inform all students that their teachers are flawed human beings, not infallible deities, and any sexual contact between teacher and student is inappropriate and abusive because of the imbalance of power that exists. Students need to know that they can question a teacher's conduct toward them at any time. They must also know that misconduct frees them from any precepts or vows they have taken and that not only is it acceptable to leave a teacher who acts out but it is imperative.

Ethics boards need to be established in all spiritual and religious centers that can hear student complaints without being tempted to sweep them under the rug. Centers should have clear, written procedures to follow in the event of a complaint. Records must be made available to law enforcement when appropriate, and students have the right to know if a teacher has a history of complaints against them. Transparency is essential.

I am concerned that I get push back from some when I write about these topics. Twenty years ago when it became clear that there were serious problems in the Roman Catholic Church the only push back came from the Church itself. The faithful were, understandably, horrified. Why the difference in Buddhism? I suspect at least part of it comes from the indoctrination that the teacher is the Buddha. To those who feel that way, I offer this question: Who Would Buddha Rape? (WWBR)
Posted by Craig Bergland at 8:00 AM No comments: