Nothing to Do, Nowhere to Do It (Part 2 of a series)

It would seem that someone has stolen western spirituality, along with its God, and locked them in a church. Or, if we ignore what claims churches make on their own behalf and take a more global view, then God is locked in churches and temples of all stripes. We could go way out on a limb and say that every church or temple does, in fact, contain the presence of God and that most if not all of those churches and temples would like you to believe that the best place to find and talk with God is within their four walls. It's understandable. That belief sustained the churches and filled their collection plates for centuries. One problem is that it simply doesn't make sense that God could be confined in this or any way, and another problem is that such assertions - whether the reason offered is a divide between sacred and secular or something even more ridiculous - create the impression that a gulf exists between humanity and God which cannot be traversed without the help of a particular building and the officials found therein. To cap the whole thing off, churches have failed to offer practices which could help one connect with God while away from the building. A more cynical person might say that churches do this to maintain and grow their power and control, a strategy that is backfiring in a big way as people leave an increasingly irrelevant church, dropping in only when crisis hits. Find a person in crisis and you will find someone looking for a church building in which to pray. We see it clearly following any national disaster - the churches are full for a few weeks, mostly during special services to commemorate whatever has happened - and then it's back to normal. 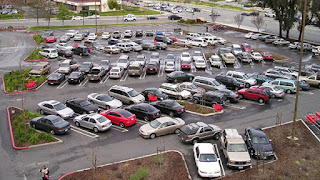 One of the results of all this is that we have gotten in the habit of turning to spirituality only in times of crisis. It's like the old joke about the busy executive who is running late for a meeting at another office. He's struggling to find a parking place, and so he decided to pray. "God, please help me find a parking place," he exclaims just as he rounds a corner and turns into the next aisle where he sees an open parking space. "Never mind, God," he cries out, "I found one!" Of course, I don't believe that's the way the Divine works, but you see the point of the story - spirituality is a last resort, used primarily when nothing else works. I believe at least part of the reason for a spirituality of last resort is that we have been taught that God is only accessible in a church building, and those places don't even have drive through windows where we can quickly pick up an order of God when needed! The truth is that very few churches offer what I am going to call portable spirituality, which I will define as a transformative spiritual practice we can do away from that church building. You may be thinking that intercessory prayer is encouraged by churches, and you are correct. However, intercessory prayer is not a transformative process in and of itself. In short, contemporary Christianity offers us nothing to do and nowhere to do it - and that's made even more problematic by churches that are primarily entertainment venues wherein those in attendance sit back and watch a show. Could anything be more passive?

Posted by Craig Bergland at 6:00 AM No comments:

Allow me to begin with a disclaimer. If you are perfectly happy with your understanding of God, this article is not for you. Neither is it for you if you are a biblical literalist or other form of radicalized Christian or fundamentalist. If you comment on this post from those perspectives, I will simply delete the comment. Thank you.

For the rest of us, the truth is that we have a God problem. We are so mired in an antiquated understanding of God that any number of undesirable things have happened. The most significant of these is that people have been left with a spirituality that is so badly fractured that it isn't helpful to them in their daily lives. Nearly as significant is that many people have dismissed God out of hand, largely because they cannot buy into the view pushed upon us by those who shout the loudest and who get the most media attention, that zany collection of terrified simpletons that make up fundamentalism. It doesn't take a contemporary person who is capable of critical thought too long to realize that a large segment of Christianity worships a book rather than a God. Nor does it take that person long to wonder why any entity worthy of the Name God would be so ego maniacal that it would want to be worshiped.

While I haven't exhausted the problems with the popular understanding of God, I believe I have listed enough to support my premise that we have a God problem. The reason for the problem is that, in the case of Christianity, all of our God information from which the powers that be tell us what to believe is between two and five thousand years old! I do not believe there is any other aspect of human existence that we view the same way we did two thousand years ago. The reason is that humanity has grown substantially over that time period. In fact, most of that growth has occurred since the Industrial Revolution. How we understand our world and our reality has been turned on its head since 1900 C.E., but our religion is still mired in (at best) a 100 C.E. world view. I would like to propose some fairly radical changes, which I will list in bold below, followed by an elaboration on the point.

1. There is an important difference between spirituality and religion. The reason is that religion is about adhering to the doctrine, dogma, and practices of a particular sub-tradition within a larger tradition. In Christianity, these sub-traditions are most often called "denominations." Spirituality is about discovering truth wherever it exists, even if that truth transcends traditions. Therefore, it allows a more thorough investigation of that truth which we may call God - but could with equal validity attach any any number of names to this Truth. Healthy religion may be spiritual as well, but unhealthy religion never is.

3. God is not an interventionist in human affairs. The reasoning is quite simple - no person claiming that God did something to or for them that avoided tragedy describes an event that could not have also been the product of random chance. Stated another way, God "journeys with" humanity rather than dragging it around kicking and screaming. When someone claims that God saved them from a disastrous event, what they are really saying is God loves them more than the victims of tragedy. That's nothing but pure ego, and ego is not a spiritual quality. It's also a pretty awful thing to say when people are suffering.

4. There is no hell except that which we create ourselves here on Earth. Let's dispel this popular behavior control technique that comes from Milton and not spirituality. Adolf Hitler tortured six million Jewish people until they died, and we quite rightly believe he is among the greatest despots in human history. Religion holds that God tortures countless people for eternity, which would make God a bigger despot that Hitler. If someone needs a God who is an abusive torturer, they have psychological problems rather than faith. Neither Jesus, nor God, nor any other figure can rightly be understood as a "Get Out of Hell Free" card, as if spirituality was a game of cosmic Monopoly.

5. Therefore, whatever salvation is, it isn't salvation from eternal damnation. Sorry, Charlie.