When the Ideal Isn't Possible (Which is Always)

We all want things to be "the way they should be." Of course, a great deal of the time the way things should be is simply an illusion or a myth. Way back in the 1950s, even before my time <gasp!>, the television show "Ozzie and Harriet" supposedly depicted idyllic family life before the onset of the rather untidy 1960s. It was only decades later that we learned that Ozzie and Harriet weren't so tidy after all, and one of their children died in a plane crash freebasing cocaine. Many people were shocked to find that Ozzie could be less than pleasant - but thank God they did, although the lesson seemed lost on most. 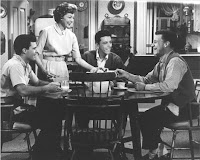 Fortunately, most of us live a much lower profile existence than Ozzie and Harriet did. Unfortunately, many if not most of us are plagued by just as many struggles. Even more unfortunately, we don't realize that our plight is rather common. Instead we suffer from the delusion that Ozzie and Harriet's television existence was normative. We wonder why our family is so different, so unusual, so abnormal - when in reality if we were to define "normal" as being "a member of the majority" our struggling families would be astonishingly normal! If we could come to terms with that it might take some of the sting out of it when others try to wound us by announcing how abnormal our families were, or when our now adult children try to hold us hostage for doing the best we could and as a result not providing the perfect childhood we all imagine we deserve but that none of us actually receives!

Many times when our adult children complain about their childhood or teen years they are trying to understand what happened or still struggling to establish their own identity. That's fair enough, and a discussion - notice I didn't say " an explanation" - is in order, at a time when emotions and passions are not running high. However, at other times complaints are coming from a much less healthy place and any attempt at an explanation will be counter-productive and only result in more damage to the relationship. For example, if someone - whether parent or child - demands some sort of restitution for the other being less than perfect, there is an unhealthy process at work. If we add mental illness to the equation, especially personality disorders, moving forward may not be possible and the best we can hope for may be a detente.

Our culture has encouraged us to develop a profound sense of entitlement. As a result, many of us believe we should never have a struggle, never have to work hard, never have to answer questions, and that we always deserve an explanation. We see the evidence in everyone from our own family members to a dejected Cam Newton walking out of a post Super Bowl press conference like a recalcitrant child. The truth is that while we all would hope that everybody would have an ideal situation all the time, in reality it doesn't work out that way. We can become trapped in wishing things had been different and never get around to working through the way things really were. That doesn't help anybody. It's rather like saying that even though it's raining today you wish that it was a clear, sunny day and so you are going to leave your umbrella at home - and them complaining because you get wet! You can't have it both ways, and while it is sometimes disappointing, reality is definitely more rewarding.
Posted by Craig Bergland at 8:00 AM