No More Enlightement, No More Heaven

Enlightenment is a wonderful goal - if you don't happen to be a Westerner. So is heaven, with the same qualification. Westerners as a group seem to have the gift of turning a goal into an obsession. For us, a goal isn't something to be worked toward, it is something to be possessed - now - and, once 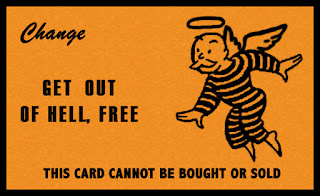 possessed, discarded. We find enlightenment and heaven to be more tools than concepts, bearing the idea that once we have achieved them we will have "arrived" and be able to place them on our mantle next to the family photos. Never mind that anyone reading the descriptions of heaven in the mystical and oft misinterpreted biblical book of Revelation and responding honestly would admit it doesn't sound like a whole lot of fun. The description is essentially that of being in church twenty-four hours a day, seven days a week, without a even potty break or coffee hour to break the monotony! Despite that, many if not most Westerners would describe heaven as their goal, even as they envision it much more in their own terms than in any description contained in scripture. We think we will see Uncle Fred again - and indeed we might, but he will be two pews over and far too busy offering eternal praise to notice us!

Enlightenment, then, seems a far better idea, doesn't it? Of course, we aren't quire sure what that means, either, but it's better than endless church. Or is it? Some believe that if we became fully enlightened we would just merge with all that is, a kind of blissed-out oblivion. While it sounds great on the surface, and would in all likelihood be great in practice, most of us would respond by saying we would prefer enlightenment be postponed until sometime after our next vacation. Perhaps if we considered the truth that we aren't really all that thrilled about merging with all that is we would shift our focus to the path, rather than the goal. In doing so, I want to say that we would achieve heaven/enlightenment without even realizing we were on the precipice. 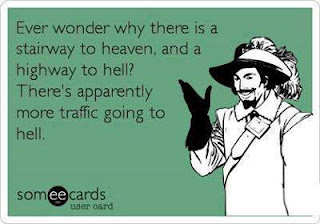 As an Interspiritual practitioner, I believe it's important to stop making distinctions between the various names the different traditions had adopted for the goal of our path. There is an old joke about the guy who is third in line to get into heaven. He notices the first person in line go up to St. Peter, who asks him for his name and religious affiliation. The man identities as a Methodist named Fred Jones. St. Peter responds by instructing him to go down the hall to room seven, but to be very quiet as he passes room three. The second person in line is Miriam Steinberg, who is Jewish. St. Peter sends her to room twelve, and admonishes her to be quiet while passing room three. Our man steps up next, and asks St. Peter why it matters what their religious affiliation was. St. Peter explains that they have found that people prefer to be in heaven together with others from a similar religious understanding. Our man asks why they have to be quiet passing room three. St. Peter responds that the Roman Catholics are in room three, and they believe they are the only ones there!

So let's drop this idea that there are different destinations, and instead come to understand that different traditions have different descriptions of the destination at which we all will arrive after this life. Further, let us agree that all of those descriptions both teach us something about our destination and also fall short and obscure it. What if we just forgot about them? Instead we might concentrate on the path, deciding to engage our spiritual practice and being of service to others because these are the right things to do, not because we anticipate any future reward. Spiritual practice isn't a life insurance policy, after all, that only pays off after death. It has the real potential to not only transform the practitioner but also the lives of those around us right now. When we come to appreciate it for its own sake, we begin to access its real potential!

Posted by Craig Bergland at 8:00 AM