You Probably Don't Care, But...

The Anglican Communion, the world-wide body of Anglican (Episcopal) Churches has suspended the Episcopal Church in the United States for three years because of the decision they made at their 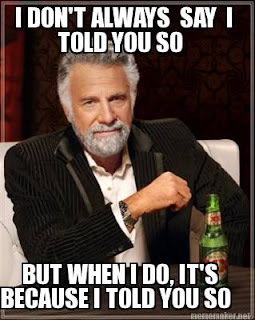 General Convention last year to marry same gender couples. I could go into why this flies in the face of what Anglicanism is - that each Church is independent and there is no Pope or other central authority figure, but I have done that before, and others have done it before, and given the massive contraction of all institutional religious bodies fewer people care each day.

I said we would refuse because we didn't want to be yoked to a bunch of ill-educated and ill-prepared bishops from Churches in the Southern Hemisphere whose understanding of biblical criticism and social justice make the most strident American fundamentalists look like radical liberals. I said that we preferred to do what was right, to treat all people with compassion and love, and not have to deal with those in the developing world who weren't ready to see the truth of God's love for all people. Now with this announcement, I feel vindicated. I was right. Oh, yes, and one other thing:

Email ThisBlogThis!Share to TwitterShare to FacebookShare to Pinterest
Labels: anglican communion, episcopal church, i told you so, suspension