Can We Get on With It Now?

This week the Supreme Court of the United States handed down what will be seen as extremely historic and transformative decisions, not the least of which was to affirm marriage for all. It is a decision that was both long overdue and which came upon us with surprising speed. When I began working for the full inclusion of lesbian and gay people in the life of the church and society almost two decades ago, I honestly did not believe that we would see marriage equality in my lifetime. Not surprisingly, the backlash on social media has been relentless. I am amazed at the fear, the confusion of opinion and fact, the misrepresentation of the Scriptures of a number of religious traditions, and the mean-spiritedness with which some people express themselves on this issue. 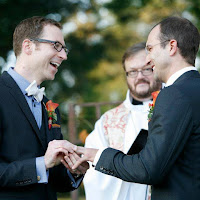 The truth is that gay and lesbian people are no different than heterosexual people. They want the same things. They are neither inherently evil nor universally good. I have been both profoundly supported and profoundly betrayed by members of the gay and lesbian community, especially in the Church. I could say the same thing about members of the heterosexual community, especially in the Church. There is no line that can be drawn, no universal distinction that can be made between human beings based on whom they love. If you happen, like me, to be heterosexual then the truth is if you have loved you have experienced the same feelings that any gay or lesbian person feels toward the one they love. Despite that, there is no shortage of people on social media who still describe lesbian and gay people as perverted, sinful, unnatural, and contrary to the will of God. The latter comment usually comes from people who self identify as Christians, but are that unique sort of "Christian" who identifies much more with the law of the Old Testament than the love of the New Testament. They are people for whom Jesus' distillation of the law and the prophets into the two great Commandments, to love God with all your heart, mind, and soul and to love your neighbor as yourself, seem to be more than their psyche can assimilate. Nevertheless, if one identifies as a Christian then Jesus simply must trump the Old Testament law.

The truth is that our religious beliefs should never become something we hide behind in an attempt to justify our fear, for it is fear that leads to anger, hatred, and violence. If we are afraid, then rather than hide we need to avail ourselves of our support groups including friends, family, and community resources. It is a mistake, no matter our beliefs about any subject, to surround ourselves only with people who see the world precisely as we do, who agree with us on every issue, and who will never challenge us when our thinking is unclear or muddled. There is no advantage in surrounding oneself with a support network that is nothing more than a group of yes-men and yes women, for such people really don't care about us and will stand by idly while we make fools of ourselves.

The truth is that whether we like it or not the rebel flag, which is not the Confederate battle flag by the way, is coming down; the affordable care act has once again been upheld; and all people are free to marry. The last two of these are now the law of the land. The law will not change nor will the flag go back up. People of all perspectives are now faced with the choice to continue attempting to fight a battle that has been decided and therefore cannot be won and in so doing to waste one's energy and only increase one's own frustration or to move forward, accepting that whatever our opinion might be about these changes in our culture the changes have in fact occurred. This will allow us to move toward healing, to move forward and address the other challenges that face us rather than depleting our energy with weeping, wailing, and gnashing of teeth over yesterday's news. Different people will be able to do this at different speeds, that is human nature. It now remains for those of us who recognize these truths to simply refuse to engage in debates about what has already been decided and in so doing save our own energy for making a difference in the world. As for me, I can do no other.
Posted by Craig Bergland at 7:53 AM