In one of my favorite Billy Crystal stand up bits, he takes off on the classic movie The Ten Commandments. In its day, it was a cinema masterpiece and a work of epic proportions. It still bears 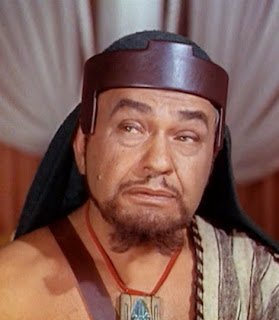 watching, but you have to put aside your need for twenty-first century special effects and keep in mind this is a movie from 1956. It was a virtual who's who of casting, including even the likes of gangster movie phenom (and terrible actor) Edward G. Robinson. Robinson, when Charlton Heston's Moses had gone up the mountain to receive the Ten Commandments and not come down fest enough for the liking of the masses, demands of Moses' brother Aaron, "Where's your Messiah now?" Billy Crystal has endless fun with this line, adding Robinson's gangster character's tendency to put "see" at the end of what seemed like every sentence. It's from Crystal's work that I draw the question that is the title of this post - I really want to know, where IS your Messiah?

I'm sure you remember all of those promises from Sunday School, CCD, books, sermons, even the 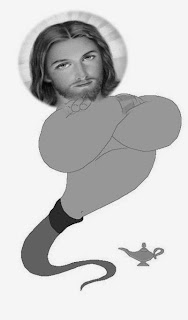 Bible - the ones that said that Jesus would always be there for you, no matter what. Wherever two or three are gathered, just ask my Father for anything in my name and it will be given to you, send the creepy televangelist a big check and it will come back ten fold - and that's just the tip of the iceberg. If you are honest, you have to admit none of that stuff has ever happened to you or anyone you know. If you are a liar and want to convince me that these promises do come true, I am afraid you are going to have to send me video evidence along with the name, addresses, and phone numbers of the people you want me to believe have received these blessings. Even if we could scrounge up a couple hundred people throughout history who got two of their friends together and called on Jesus to appear like a genie popping out of a bottle, there are literally millions more whose call was not answered. They, and their friends and relatives, are mad as hell and they want to know what the deal is.

Of course, I have been trained to know all of the official answers and explanations. I am even willing to pass along the most reasonable one - that either the authors of the gospels of some later editor added these claims and they never sprang from the lips of Jesus. That would be all well and good if we weren't sitting here not quite two thousand years later waiting for a retraction. We would probably be willing to settle for a clarification or six, but they don't seem to be coming. While there is a shortage of explanations, there doesn't seem to be any shortage of clergy types hanging around mystified as to why there is a credibility problem in Christianity today. In truth, Christianity didn't need scandals to blow (pun intended) its credibility out of the water as long as it had its history of doctrine and dogma. It wouldn't be fair to only blame the institution, however, because for the last six hundred years we have been able to hold a copy of the Bible in our hands, though most of us have probably only been able to read it for the last hundred years or so. While it does have its share of fantastic claims that defy 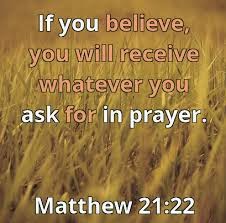 understanding, it also pretty clearly says not to look outside of the here and now for your salvation. Whose fault is it that we preferred the easy, though imaginary, way out and kept looking to the sky?

I don't want to bore you with a Bible or Sutra study, but both the Buddha and Jesus were pretty clear that we are the agents of our own destiny. They used different language. Buddha talked about enlightenment and nirvana while Jesus talked about the Kingdom of Heaven, but they were both saying we had to do the heavy lifting ourselves. This propensity we have for grabbing onto isolated passages of scripture - whether Buddhist, Christian, or some other tradition - and insisting our favorite snippet means that somebody else has to rescue us isn't going to change either reality or truth. We can weep and gnash our teeth, or in contemporary terms piss and moan, all we want but it won't change the truth that your Messiah is within you. The reason you aren't very happy about that truth is that sometimes 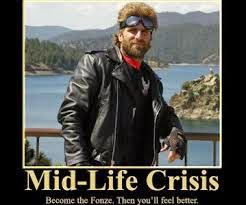 For the vast majority of us, life doesn't work out precisely according to our dreams. By the time we hit fifty years old we can see that pretty clearly, and some of us engage in some pretty stupid exercises in futility to try to convince ourselves we can make it work out according to our dreams. All of the running around involved in midlife crises of one sort or another, all of the new objects of attachment purchased do absolutely nothing to change reality. In fact, they often create even a bigger mess than we had on our hands when we realized things weren't going according to Hoyle. The sad thing is that many of us just run from one "cure" for our dissatisfaction to another, never slowing down long enough to see that they aren't working - and that we are alienating just about everyone around us in the process.

The truth is that when we are in the midst of this hot mess called life, the only thing that will help us is to see things as they really are is spiritual practice. Buddhists talk of seeing through the ego to impermanence and emptiness while Christians talk of moving from the False Self to the True Self. It doesn't really matter which language appeals to you more, both systems will get us to the same place - and so will Judaism, Islam, and every other tradition. The thing is that you have do the work and you have to decide to start. There's no time to start like now, because every day you waste is another day of dissatisfaction. So, cancel your appointment for liposuction and hair plugs, penis extensions or labiaplasty, and get started with some serious spiritual practice already! If you don't know how, contact me. I can help.
Posted by Craig Bergland at 11:23 PM