Redefining Masculinity in the Church

I have been reading and listening to much of Richard Rohr's work on male spirituality lately, It's really good, insightful work, and it identifies two points that really resonate within me. The first is that while the feminist movement arose and did (and continues to do) important work for women in the last century, there was no corresponding movement among men. Sure, there was the "men's movement" of the eighties and nineties that featured Robert Bly and Iron John, some of which Fr. Rohr participated in, but if we are honest it was a small subset of men who participated in that men's movement, steeped as it was in Jungian psychology and archetype - ideas that are great if you are schooled in them, but the average man simply isn't schooled in them! Out of this work there are some good things that arose, including men's retreats that seek to provide young men - especially from urban areas - with rites of initiation that are transformative. I would also point to the excellent work done by Jack Kornfield and others in offering men's retreats at Spirit Rock - again, targeting young urban men who have been exposed to horrific violence and who are in need of authentic initiation rites to replace the inauthentic initiation rites of manufactured violence in our cities and towns. Still, there are only a limited number of people who can be reached by those retreats and initiations, and while the need is great the funding is scarce.

In the context of church Fr. Rohr asserts that there is very little for men in the way we worship and organize church today. He says that men don't like to sing, don't want to hold hands during the Lord's Prayer, aren't especially taken by the use of fabric to decorate sanctuaries and the clergy therein, and couldn't care less about what the preacher has to say because it doesn't apply to them. I don't know that all of that is completely fair, because while women are certainly the majority in churches today it's not as if there aren't any men. It would be easy to simplify Fr. Rohr's observation to the point of absurdity and say that if there isn't a football game, a quarter barrel of beer, and something to kill and skin, men aren't showing up. Such a view makes it seem like we need to remodel church libraries into the parody of uber-masculinity that gay leather bars are in order to get men to show up. That is, of course, absurd - but does he have a point? Is there nothing in the church for the hunting, fishing, pickup truck driving, macho-man? Is that image of a man even relevant today, or is it restricted to a subset of the male population in mostly rural areas as well as the middle class, mobile male in suburbs?

For a time men seemed to listen to women trying to tell us what it was to be male, and we learned to cry and tolerate watching Lifetime movies because doing so sometimes got us laid, but it wasn't authentic transformation. It's certainly true that if a man goes through therapy he emerges much more in touch with his own feelings as well as with a better idea of what others are feeling and experiencing. That doesn't mean they are going to give up a weekend of ice fishing to sing "All Creatures of Our God and King!" Still, there are those men who are already in church, and it's not because they are all cuckold, mincing, spineless excuses for real men who have allowed themselves to be dominated by their overbearing wives.

I confess I am not much of a macho man. I'm not really into pickup trucks or NASCAR (once those boys realize they are driving really fast but going nowhere that sport will be dead in the water). I used to fish with my Dad but haven't since our relationship imploded and I rejected everything about him, and I have never hunted. I don't consider freezing my ass off to be fun, so you won't find me squatting over a hole in the ice inside a shelter filled with other drunken men. I realize that wrestling isn't real and that cage fighting is an all too real event that brutalizes human beings in the name of entertainment and I won't have anything to do with either. I drink beer and love football, so I am 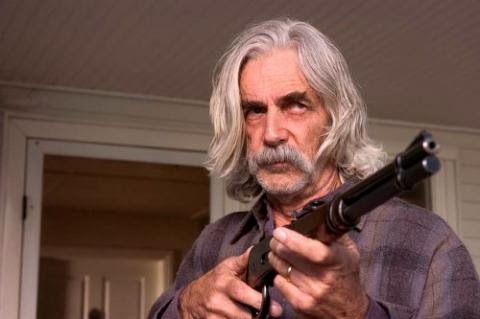 not the anti-man, either. I have been through a personal hell and emerged alive, so I don't need to sit alone in the woods overnight to believe I am a man. I've got that one, thanks. I'm fine in church, in fact I love being in church, but recognize I am the exception to the rule.

Here's my question: what makes us think that the willingness to worship God in a sanctuary is the defining mark of a Christian? If God is who we say God is, that God doesn't have ego needs and doesn't need us kissing his Divine buttocks in the sanctuary. I have heard the assertion that human beings need to worship, but the eighty percent of America that has walked away from institutional religion seems to tell a different story. So how are we to get the Sam Elliotts of the world to reconnect with church? We give them something to do, and give them a pass on the whole hand holding sanctuary business.

We have young men in this country in spades who need mentoring, and they are in all parts of towm. They need to ride in a pickup truck, go fishing, go to the ball game, learn to spit and swear, squat in a shelter on
the ice peering into a hole for fish, and stomp through the woods looking for an animal to kill. (By the way, if you don't like hunting, don't hunt, but spare me your whining about it. I don't like crocheting, but I am not trying to steal your yarn. See photo at left.) They also need to learn how to fix things and build things. We need to bring our stereotypical males back into the church by telling them we need them to teach some kids how to do things they need to do - essentially, mentor them and initiate them at the same time. We transform church land that once might have been a church camp or some other space that has fallen into disuse into a mentoring camp. We tell these men the truth, that they are serving God and community by taking these kids out with them doing what they love to do AND by participating in projects like Habitat for Humanity with their new friends.

Then, best of all, a couple of times a year we invite them to the church for a pig roast during a sporting event. We even let them do a lot of the work - together with their new, younger friends. We tell the rest of the church to stay away if they will be offended and bring some food if they can hang. We make it clear that this isn't going to be a goody two shoes gathering but instead a gathering of real people with nobody to impress. They can join the Altar Guild if they want to hang with goody two shoes. We do all of this without any strings attached because we want to see our communities and our young people transformed. We make it clear we are not trying to lure the men into worship, committee work, or any other nonsense - because they are already doing the real work of the church.

I don't think the church has the guts to do anything remotely resembling this, and it's really sad.

If you're like me and are a man who doesn't especially want to - or can't - stomp through the woods, it's

okay. You probably have carved out a space for yourself in the church as it exists, and that's a good thing because somebody needs to be carving a path for all of those macho men when they get old enough that their bodies won't let them crap in the woods any longer. We will be here to show them a more excellent way that ensures they are welcome and honored. What could be more important than that?

Posted by Craig Bergland at 4:46 PM